I know, the last thing that you want is to go somewhere on vacation and not have too many things to pack with you. But the truth is that inflatable pool floats don’t take up much space when they’re deflated and fit nicely in your luggage. Here are two hot items that are still very popular at any beach or pool you decide to visit.

The allure of Swans and Unicorns

Some animals never seem to get old and tend to have an evergreen theme to them. These two animals are both iconic and graceful and have been glorified in fairy tales for hundreds of years. While you might think that swans don’t have magical powers but you would be totally wrong. The swan has long been known to be magical in some way and has been featured in great classic tales such as The Six Swans by the Brothers Grimm.

The swan is also immortalized in The Wild Swans written by Hans Christian Anderson too. Even though both stories are variants of each other, the swans are actually children who are transformed due to a curse that causes them to become swans. They can only become human for a short time at night. In many other stories, swans take on a magical role especially if you know the story of Swan Lake.

Swans are also known to be graceful and mothering mammals of flight which gives them a more credible reason to have mystical powers. Let me tell you something if you’ve ever been to any big public lake and swans are there, you better not get too close since these elegant creatures can be real pissed-off nippers if you get too close. But that hasn’t kept most of us from feeling that swans are peaceful and graceful wherever they happen to live.

Unicorns on the other hand have garnered more interest in the last 20 years among a culture that embraces rainbows and unlimited wishes. The sight of any unicorn image immediately tells you that this animal is all about purity and could purify any water it visited with a touch of its horn. It’s also said that the power of the unicorn also contains super strength and super speed which is why it never seems to be possible to catch.

Nowadays, the symbol of the unicorn takes on a pop culture angle with an anything-goes attitude. Sort of like equating magical powers and the symbolism of universal love. Obviously, rainbows are included here too, which always seem to follow a unicorn wherever they go. But no matter what kind of cotton candy label you attach to unicorns these days, these creatures are considered magical for all the right reasons. 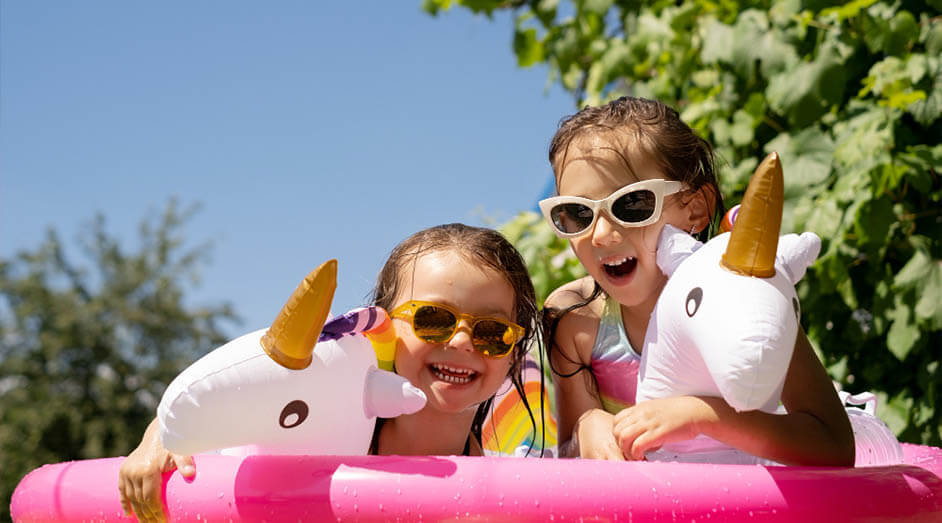 Call me old-fashioned but as Cindy Lauper always says- Girls Just Wanna Have Fun’… Wait a sec, Cindy who? Umm yeah, I meant Cardi B, but then again it’s the same concept no matter what. Everyone it seems is tossing in the towel for growing up these days and when you want to live large, you have to show how much you mean it. This is why you can’t show up to your poolside or beach with some dinky squeaky toy!

It’s a status symbol for those who like to show they’re not afraid to show off once and a while. Then again, you might look like a total noob if you’re caught dragging some oversize pool toy with you. So don’t forget to have a considerate concierge or poolside helper to bring these down for you. To make the job a little bit easier, I recommend a portable air blower that you can plug in to inflate and deflate these floats in minutes.

Where to find the best pool floats? I’m not very picky, but I don’t like spending most of my time searching for bargains on eBay. The best places to find inflatable unicorns and swans are on Amazon. To get a good sense of how big you want starts with your needs. Many animal floats are pretty big, so you don’t want to attract too much attention. But you also want to check the customer reviews to see if these are made to last and if there are any problems with them once they’re inflated.

Expect that the weight is going to be minimal with at least 2 kilos per oversize animal float. This is only 5 lbs. and can fit into any side compartment in your luggage or even in a carry-on bag. As far as price, well you can figure that most of the cheaper priced versions start around $35 and go up from there. Don’t try buying anything cheaper unless the seller has great product reviews- You can save some time and money checking the customer comments!

Don’t get suckered into buying a float where you go and take your vacation, this is a terrible idea. You can’t get a refund and often these sidewalk vendors like to add their markup price well above what is considered reasonable. I had a terrible experience when I went to Florida where the plastic material was so flimsy that it sank right after I got onto it. I nearly drowned when the plastic had wrapped all around me.

Luckily, one guy who saw the whole incident saved me in time before things got out of hand. What made things worse was going back to find that that person who was selling pool floats had disappeared because they didn’t have a seller’s permit. Later, I found out that they weren’t even a citizen and feared getting deported. So always be on the lookout for sketchy vendors who aren’t working inside a storefront shop.

Be prepared for the worst If you do spring a leak, I highly recommend buying a repair kit for these kinds of animal floats. You would be surprised how much damage your decorative jewelry can do to vinyl surfaces and it doesn’t take much effort to cause a tiny hole to turn into a growing gash.

These kits are very affordable and you can repair your float in less than half an hour in most cases. Be smart and bring one of these with you just in case!